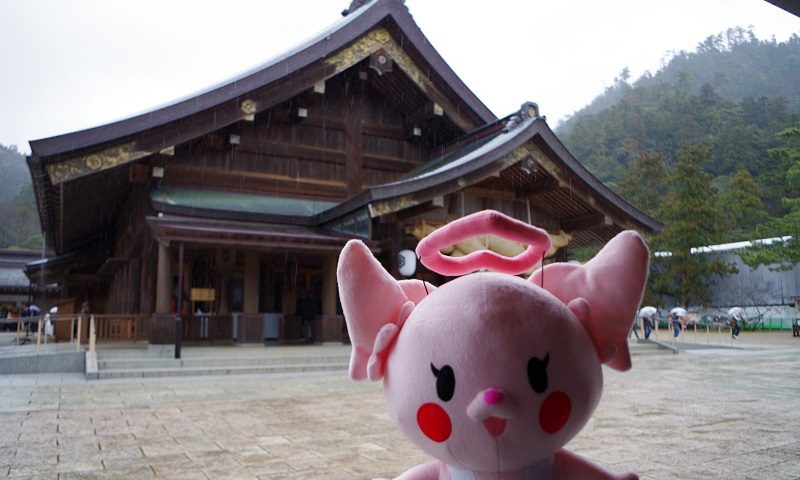 The Izumotaisha is a pretty old shrine, according to the oldest historical fact of Japan. Until the beginning of the Meiji era, it was called the Kitsukitaisha.
Its god is known for match making and wealth, and there are about 2 million visitors coming to worship the shrine.

[Okuninushinomikoto, the God of Match Making]
Okuninushinomikoto is enshrined based on the historical facts and one of the storiesfrom the oldest chronicals of Japan’s, “Kuniyuzuri”. Ookuninushinomikoto is also known as Daikokusama, one of the Seven Dieites. Other than that, he is known by his other name, Onamuchinomikoto.
The reason why Okuninushinomikoto became enshrined in the Izumotaisha, and also became the god of match making after he transferred the land to Amaterasu Okami? That’s because Okuninushinomikoto is also athe ruler of the Realm of the Dead.
The Realm of the Dead is a world of the gods, and it’s also a place where the spirits of the deceased returns to after its body dies. This god has been worshipped for gathering the other gods on October and holding meetings such as, “who wants to match with who’s destiny?”, and dealing with the world’s “destinies” unseen by the human eye.
Also, he was known for being a god with many loves. He married many goddess’ beared 180 children in total. From this point of view, you can now understand that he is also a god of beckoning good destinies.

[The Match Making Charm With Great Effects]
There are many match making gods everywhere, but the match making charm of Izumotaisha has  great effects, and is very popular for women who are seeking for some good destinies.
Not only does he mediate the destinies between men and women, but also jobs, married couples, families, etc., too.
For receiving the divine blessings of the charm, it’s very important how you hold it! You can’t just place it anywhere after you buy it, that’s outrageous. There is a god in the charm you’re holding, so you should always keep it to you close no matter what. Putting the charm in your purse or on your smartphone is the best way, but if it’s too difficult, you can place it somewhere where you can always see it.

[The Red Thread of Match Making]
This one isn’t really a charm, but there is a thing wrapped in red and white called, “The Thread of Match Making”. This thing also has a divine blessing of match making, too. You can carry it with you as it is, or sew it on your handkerchief and clothes, or even tie it through a hole of a five yen coin.
If you tie this thread to a coin, you might have a good destiny with money. If you carry it with the charm as a set, there might be a good destiny with people, money, and other things, too.
By the way, even if the thread snaps in two, you don’t have to worry about “getting a destiny cut”.

【Pray stone Tamazukuri Jinja】
You can get a Pray stone at Tamazukuri onsen where close to Izumotaisha.
At first, you pay 600yen at the shrine office before Torii gate (the gateway of the shrine).
You can pick one for you from wrappings on the table.
Then you make a pilgrimage with referring steps on the wrapping. 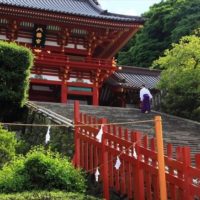 Here’s a trick to getting a good match at a match making spot located in Kamakura!