Here’s a trick to getting a good match at a match making spot located in Kamakura!

[ The shrine filled with the memories of Yoritomo Minamoto and Masako Hokujyo ]
When it comes to the Tsuruoka Hachiman Shrine, it is famously known not only for Yoritomo Minamoto, but also his wife, Masako Hokujyo, too. However, these two weren’t together to begin with. When they met for the first time, Yoritomo was a criminal, and Masako’s father, who was Tokimasa Hokujyo, never wanted this man to be near his daughter. If you were in his place, I doubt you will, too.
Although their love was looked down upon, they never gave up. When Masako was forced to marry a general of Yukari Heishi for political reasons, she ran away from home and went straight to Yoritomo.
At last, Tokimasa approved their love, thus leading the couple to a happy marriage in the end. With that being said, the Tsuruoka Hachiman Shrine came to be known as a place for good match.
Floating above the Genji pond, on a Nakanoshima behind Benzaiten, there is a stone called ‘Masako’s Stone’ . It is said that the stone was used by Yoritomo for Masako’s safe delivery of  her child, and is also known for its other name, ‘the Princess’ Stone’ . It is also known as a sacred stone used by the couple for good relationship between husband and wife.

[  The Match Making Charm of Shizuka Gozen ]
Yoshitsune Yoritomo was known for his tragic love story with Shizuka Gozen. After the departure with Yohitsune at Mt. Yoshino, Shizuka Gozen was captured and sent to Kamakura.
She was ordered to dance in front of the altar of  the Hachiman Shrine. This is the poem she wrote during that time:

When she was performing the Dance of Gift at the Hachiman Daibosatsu, Shizuka Gozen danced to the music of the Imayo Song with a feeling of sadness towards the departure of  Yoshitsune and her undying thoughts for him. This made Yoritomo very angry.
However, Masako told Yoritomo, “I would do the same thing if  I was in her position.” .
‘The Match Making Charm’ was based on Shizuka Gozen’s performance. Even though both the women’s fate of love ended in a tragic way, Shizuka’s undying love for her lover and Masako’s understanding of Shizuka’s feeling has been molded into this charm.
This charm goes by a another name, known as ‘The Wodamaki (Match Making) Charm’ . You can choose from three colors.

[ The Pigeon Charm for Communication ]
There is also another charm at The Pigeon Shrine of The Tsuruoka Hachiman Shrine, known as The Pigeon Charm. The Main Shrine of the Hachiman Shrine’s frame resembles the Chinese character, ‘hachi (eight) ‘.
The pigeon is usually known for ‘delivering feelings and words’ or delivering messages. If a person has difficulty telling another person their feelings, the charm is supposed to help him or her ‘deliver’ them to the other person. Thus, the charm is now a symbol for ‘delivering feelings and words’. 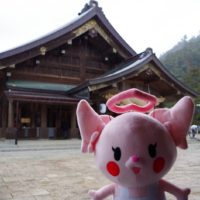